If you use this guide and research the key concepts on the Praxis®️ Middle School English Language Arts on your own, it’s possible you will pass, but why take that chance? With our paid study guide, we guarantee you will pass. The Praxis®️ Middle School English Language Arts test is designed to assess whether an examinee has the knowledge, skills, and abilities needed to teach ELA at the middle school level.

The passing score range varies from state to state. To find the score needed to pass in your state, visit https://www.ets.org/praxis/states.

Once you know your testing date, try to create a schedule that will allow you to cover all of the test topics in a reasonable amount of time. Review the skills in each content category to determine the ones with which you are least comfortable. Spend the majority of your study time on these. Plan to spend at least several weeks studying so that you are not overwhelmed. Information and screenshots obtained from the ETS Praxis®️ website: https://www.ets.org/praxis/prepare/materials/5047

So, let’s talk about the General Knowledge section first. This section tests your general knowledge of literature, genres, and subgenres.

on a sea of mist

Charles Dickens was an English author (perhaps one of the greatest of the Victorian time period) whose stories and characters are still widely read about today.

Dickens wrote a total of 15 novels and five novellas, along with many short stories.  Some of the most well-known works include:

Fables are short stories that teach a lesson. Usually, fables have animals or inanimate objects as the main characters. Aesop’s Fables are the most well-known fables and include: This section tests your knowledge of literature, including interpretation, theme, literary elements, word choice, and comprehension skills. It also tests your understanding of poetic structure and devices and how they contribute to the overall meaning of the poem.

Characterization is the way an author conveys information about characters in fiction.  Characters…

Direct characterization is how an author explains a character in a very specific and straightforward way. Many times this helps explain a character’s motivation behind his or her actions. For example:

“The quiet boy and patient girl both had very good manners and did not disobey their teacher.”

The writer tells the reader the exact traits of the characters.

Indirect characterization is a process where an author shows the character’s personality through their actions, appearance, and speech. For example, in Steinbeck’s The Grapes of Wrath:

“Joad took a quick drink from the flask. He dragged the last smoke from his raveling cigarette and then, with calloused thumb and forefinger, crushed out the glowing end. He rubbed the butt to a pulp and put it out the window, letting the breeze suck it from his fingers.”

The writer doesn’t specifically say that the character was “down and out,” but the reader knows that based on all the provided context clues.

Every story has a plot, and every plot follows a specific structure. A plot typically contains: This section tests your knowledge interpreting informational texts with attention to organizational patterns, word choice, and methods authors use, such as point of view and rhetoric.

Text structures refer to how the information in a text is organized. Informational text is typically organized into one of six structures:

Connotation and denotation both need to be considered when reading and writing so that the reader can fully understand the author’s message and meaning.

Denotation refers to the literal meaning of a word or the meaning you would find in a dictionary.

An example would be the words “childlike” and “childish.” The denotations of both words are very similar; however, their connotations are different. The word childish is used with a negative connotation, while the word “childlike” is used in a less negative way. It describes the behavior of an actual child in a more positive way, not someone who is acting childlike but who is not a child and should know better.

And that’s some basic info about the Reading content category of the Praxis®️ Middle School ELA exam.

Kind of a big decision? Get a sneak peek inside the Praxis®️ 5047 Study Guide for yourself. 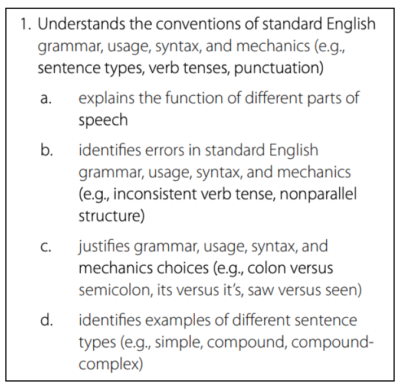 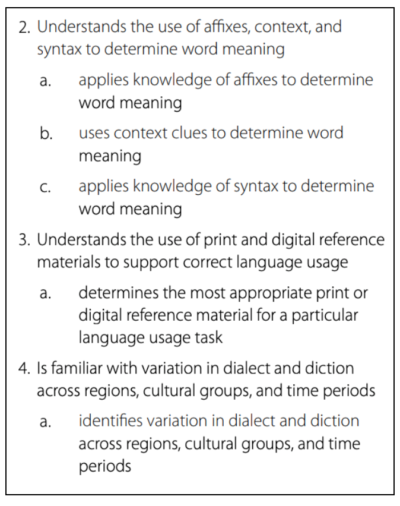 Effective writing uses various sentence types. It is important to understand the differences between each type. Three types of sentences that are most commonly used are:

Simple sentences contain a subject and a verb that come together to create a complete thought. Examples:

Joe and Sam drove to school.

Emily waited for the bus.

The teacher was late.

Compound sentences are made up of two independent clauses that are connected with a conjunction. Conjunctions include for, and, nor, but, or, yet, and so. Examples:

Emily waited for the bus, but the bus was late.

Joe and Sam drove to school, so I missed them at the bus stop.

The teacher was late to school, and she forgot to bring her coffee.

Because Joe and Sam drove to school, I did not see them at the bus stop.

While Emily waited at the bus stop, she realized the bus was running late.

After they drove to school, Joe and Sam realized that Emily was waiting at the bus stop.

Authors use parallel structure (or parallelism) to add clarity to writing by creating word patterns that are easy for a reader to follow. Authors do this by repeating grammatical form in a sentence using a pattern.  For example:

The nonparallel structure was corrected when all the tenses of the verbs were changed to the same tense.

Colons and semicolons are used to separate thoughts and independent clauses, which are clauses that could be complete sentences.

Most often a semicolon will:

I went to the store today.  I bought some fruit; bananas, apples, and blueberries were all half off.

Most often a colon will:

We covered many topics in math class today: multiplication, division, and adding and subtracting fractions.

My parents gave me what I needed most: love, patience, and kindness.

A dolphin is not a fish: it is a mammal.

Master & Commander: The Far Side of the World

And that’s some basic info about the Language Use and Vocabulary content category of the Praxis®️ Middle School ELA exam. 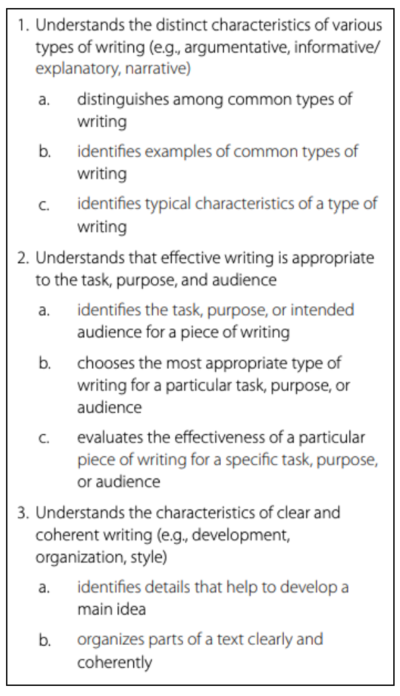 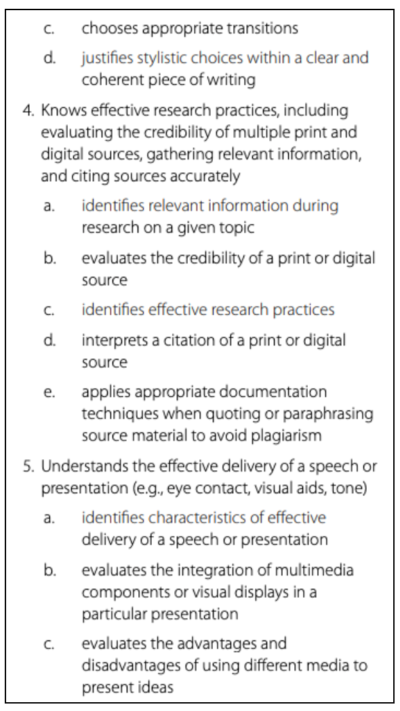 The Writing, Speaking, and Listening content category has 26 selected-response questions. These questions account for 18% of the entire exam.

So, let’s talk about some concepts you need to know.

There are four main types of writing:

Expository– The author is writing to explain something to, or inform the reader.

Example: An essay describing the effects of the Civil War.

Narrative– The author is telling a story which could be fact or fiction.

Descriptive– A specific type of expository writing that uses the five senses, imagery, and details to help the reader envision what is going on in the story.

Example: A poem about the sounds and sights of fall in Boston.

Persuasive– The author is stating their opinion AND attempts to influence the reader’s opinion as well.

Example: An article trying to persuade readers to boycott a specific restaurant.

And that’s some basic info about the Writing, Speaking, and Listening content category of the Praxis®️ Middle School ELA exam. 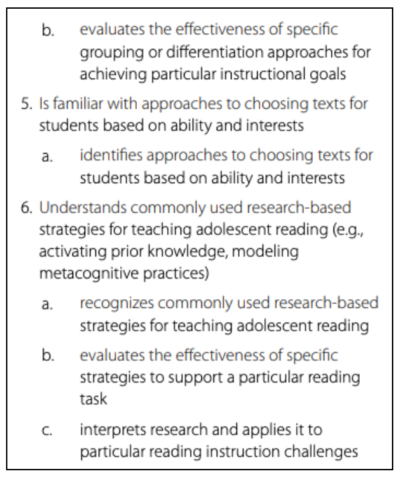 This content category tests your knowledge of using effective English Language Arts instruction and assessment in the classroom for students with various needs.

So, let’s talk about some concepts you need to know.

Teachers can use different types of grouping in their classroom to better meet the individual learning needs of students. There are many ways to group students, but some of the most effective cooperative grouping strategies are:

Teachers group students and break material into chunks. Students in the group are given a section of material and tasked with becoming the “expert” on that section. Then students share their information with the group, and the whole lesson comes together like a puzzle. Once students have a chance to share their material, each student is tested over all the material from that lesson.

Similar to a jigsaw, a group investigation groups students of mixed abilities. Instead of being responsible for a section of information, each student has a specific role in the group while the whole group works towards the same learning target.  Students must fulfill their role so that the task is complete. The teacher evaluates the whole group product as well as each student’s contribution.

Teachers form mixed ability groups and give students tasks to help other students complete. The goal of the group is to complete the assignment together in an effort to encourage students to teach others what they know. This helps both students, the one teaching and the one listening. If the teacher is choosing to use the peer tutoring model, he or she should have already presented the material that the students are asked to cover.

Formative and summative assessments are both necessary in the classroom. Using them at the appropriate time is very important.

There are many ways that teachers can support second language acquisition. Some of the most popular and effective are:

And that’s some basic info about the English Language Arts Instruction content category of the Praxis®️ Middle School ELA exam.

This exam includes two constructed-response questions. Constructed-response, or CR questions, require you to show your knowledge of a subject area by writing your own response to various topics. You might be asked to agree or disagree with a topic by supporting your position with specific examples and reasons from experience or reading.

The CR questions are equally weighted and makeup approximately 25% of the overall score. The questions will fall into three categories:

When answering a CR question, be sure to:

And that is some information about the Praxis®️ Middle School English Language Arts exam.